Written by celebrated and award-winning composer Dave Malloy, this electropop opera is based upon a scandalous slice of Leo Tolstoy’s War and Peace. Young and impulsive, Natasha Rostova arrives in Moscow to await the return of her fiancé from the front lines. When she falls under the spell of the roguish Anatole, it is up to Pierre, a family friend in the middle of an existential crisis, to pick up the pieces of her shattered reputation. The Ashby Stage will transform into a 19th century Russian nightclub, with cabaret tables, Russian vodka, and an immersive and unforgettable theatrical experience.  The New York Times proclaimed Natasha, Pierre & the Great Comet of 1812 to be, “Both the most innovative and the best new musical to open on Broadway since Hamilton!" This award-winning musical extravaganza, nominated for twelve Tony Awards, comes to the Bay Area for the first time after an acclaimed run on Broadway. Nominated for 12 Tony Awards! Shotgun Players has enjoyed a long and collaborative relationship with Natasha, Pierre & the Great Comet of 1812 creator Dave Malloy. The composer, a former Bay Area resident, started working with Shotgun Players in 2005 as music director of Cabaret. In 2008, he composed music for Vera Wilde and co-created and composed Beowulf: A Thousand Years of Baggage (in collaboration with Banana Bag & Bodice) for the Ashby Stage. Following Beowulf’s celebrated run at Ars Nova in New York, Malloy co-created and composed the Shotgun Players production of Beardo in 2011. Shotgun Players Artistic Director Patrick Dooley says, “It’s not every day that we get to produce the West Coast premiere of a show that was nominated for 12 Tonys, but Natasha, Pierre & the Great Comet of 1812 was written by Dave Malloy, someone who got his start working with Shotgun Players and other Bay Area theaters like ours not too long ago. There’s high drama, and because it’s a Malloy musical, it’s all woven together with his signature, irreverent, soulful music and lyrics. I saw the show while it was in previews at Ars Nova back in 2012, and it’s been my dream to see it at the Ashby Stage ever since.” Watch an Interview with Composer and Lyricist Dave Malloy 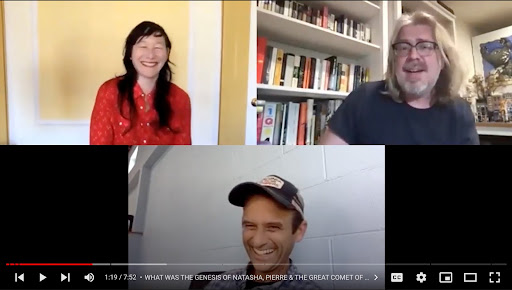 Dave Malloy is a composer/writer/ performer/orchestrator. He has written fourteen musicals, including Moby-Dick, a four-part musical reckoning with Melville’s classic novel; Octet, a chamber choir musical about internet addiction; Natasha, Pierre & The Great Comet of 1812, an electropop opera based on a slice of Tolstoy’s War & Peace (12 Tony nominations, including Best Musical, Score, Book, and Orchestrations); Ghost Quartet, a song cycle about love, death, and whiskey; Preludes, a musical fantasia set in the hypnotized mind of Sergei Rachmaninoff; Little Bunny Foo Foo, a forest entertainment for small people; Three Pianos, a drunken romp through Schubert’s “Winterreise”; Black Wizard/Blue Wizard, an escapist RPG fantasy; Beowulf—A Thousand Years of Baggage, an anti-academia rock opera; Beardo, a reinterpretation of the Rasputin myth; Sandwich, a musical about killing animals; and Clown Bible, Genesis to Revelation told through clowns. He has won two Obie Awards, a Smithsonian Ingenuity Award, a Theater World Award, the Richard Rodgers Award, an ASCAP New Horizons Award, and a Jonathan Larson Grant, and has been a MacDowell fellow and Composer-in-Residence at Ars Nova and the Signature Theatre. He lives in Brooklyn. www.davemalloy.com

Patrick Dooley - Co-director Patrick started Shotgun Players in 1992 in the basement of a pizza parlor with a few friends and a desire to make great theatre that was also affordable. Before that he received a B.A. in English from James Madison University, in Virginia. While there, he cut his theatre teeth as a founding member of the American Shakespeare Center. Since then, Patrick has directed over 40 plays and overseen the production of nearly 100 others. In 2007, he led an effort to make the Ashby Stage the first 100% solar-powered theater in America. He is married and has three beautiful daughters. Erin Mei-Ling Stuart - Co-Director & Choreographer Erin Mei-Ling Stuart is a multidisciplinary Bay Area theater and performing artist. She directs, choreographs, devises, acts, dances, and occasionally makes music and scrappy videos. Directing and choreography credits include creating 30+ works for EmSpace Dance, her now-defunct dance theater company, and directing the premiere of Brian Thorstenson's Wakefield. Erin is a proud company member of Shotgun Players and Detour Dance. More at erinmstuart.com. Daniel Alley - Music Director Daniel Alley is a Bay Area conductor, music director, and répétiteur specializing in opera and musical theater. Recent music directing credits include Passing Strange, Vinegar Tom (SFBATCC nomination), and The Events (assistant music director) at Shotgun Players; Ragtime (co-music director with David Möschler), The Light in the Piazza (cover conductor) at YMTC; Memphis (SFBATCC nomination) at Berkeley Playhouse, and The Fantasticks at Piedmont Center for the Arts. With West Edge Opera, he was Chorus Master for Donizetti’s Caterina Cornaro, Verdi’s Aroldo, and Puccini’s La Bohème (assistant conductor). He is a resident Youthstage music director at Berkeley Playhouse, where he has led over ten productions, including A Chorus Line, Head Over Heels, Urinetown, and Pippin.

Arrive in Costume for a Free Drink!

In order to make Natasha, Pierre & the Great Comet of 1812 as immersive an experience as possible, Shotgun Players is offering a free drink voucher to anyone arriving in 19th-century Russian costume, including waistcoats, breeches, empire waist gowns, faux fur hats and stoles, and embroidered coats. See below for some style inspiration , courtesy of our costume designer Jasmine Milan Williams. 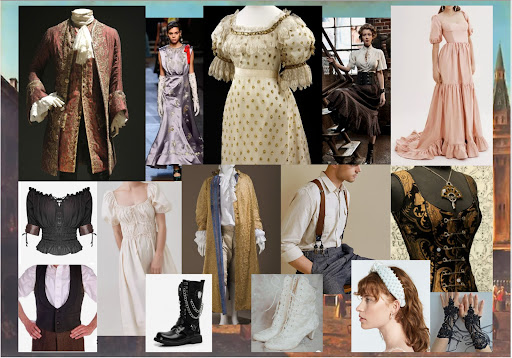