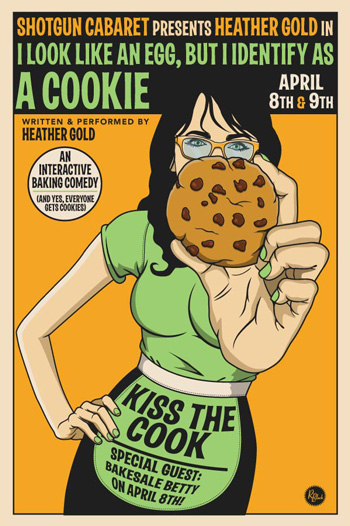 Shotgun Cabaret presents Heather Gold in I LOOK LIKE AN EGG, BUT I IDENTIFY AS A COOKIE Two nights only! Monday, April 8th  •  Tuesday, April 9th 8pm at the Ashby Stage  •  $20 Special guest at Tuesday's show: Tanya Holland, owner/chef of Oakland's Brown Sugar Kitchen!
In this innovative, smash-hit debut, solo performer Heather Gold sifts through the complexities of sexuality and identity with baking’s simple truths. Gold tells her coming-of-age story as she makes chocolate chip cookies with the audience through her own hilarious and moving exploration of the recipe: heterosexuality (DRY), lesbianism (WET), the Left (MIX) and other tasty 1980s tunes and secret ingredients. Gold reveals the coming-out story as a universal coming-of-self story and makes mincemeat of the identities that keep us from our real selves and each other. And yes, everyone gets cookies.
"Breathing new life into the solo show format.” - Oakland Tribune
Share Link: www.tinyurl.com/ShotgunCookie